Javascript and NPM and wonderful things, even when they aren't. In the spirit of open source, I get to build many new things by standing on the shoulders of others — and there's no shortage of shoulders to stand on! But sometimes, this gets a little overwhelming. When do I choose to start from scratch, and when do I try to use something that someone else has built? In a few words, here's my thought process:

First, if your career or hobby goals revolve around building at this level of abstraction, stop reading this article. You want to know this stuff if you're junior, and you're building things at the applied level.

At many levels of the abstraction chain before "applied", there are those who have spent hours building, testing, and refining that thing. It's when the level of abstraction gets closer to applied that you really have to start asking yourself...

When you start asking "should I use this library" at the applied level, you're going to want to start doing the research so that you don't run into serious problems too far in. Here are the ones I go by:

Often I make web maps, and I've been doing it within React a bit more as of late. I'm a fan of MapboxGL in my work, just for how smooth its operation can be and the people which support it. Now, I often reach for UI libraries to do the thing I want and I started to go the same way with MapboxGL. In React-land, there are two libraries in use: react-map-gl and react-mapbox-gl. Here's a chart of their relative popularity: 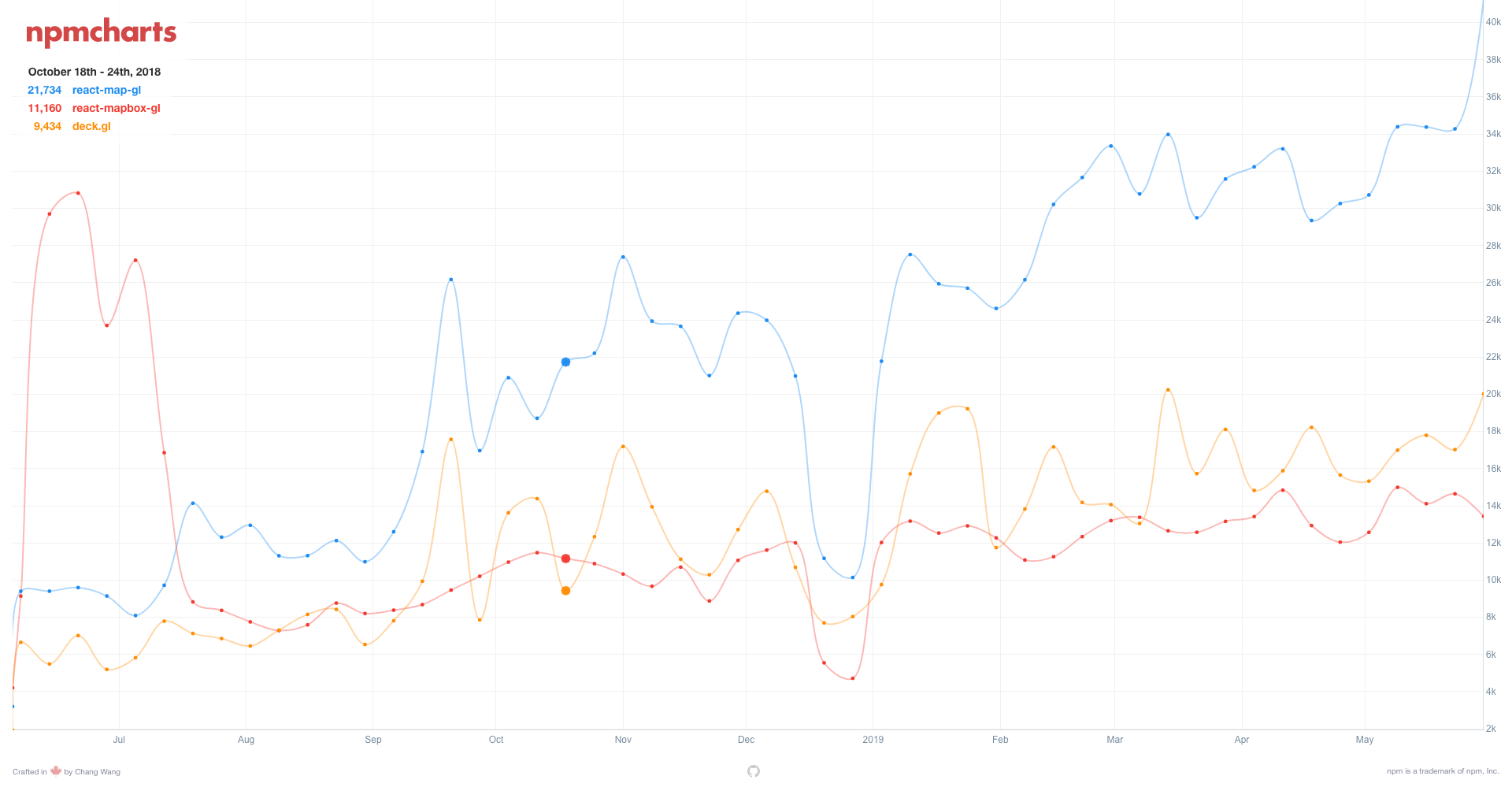 This library is a friendly wrapper built around MapboxGL for React applications. It is owned by Uber, and maintained with a lot of care and love by its team. But it wasn't built to have the entire suite of tools in the Mapbox GL JS library accessed with ease. It even offers a friendly reminder (https://github.com/uber/react-map-gl#before-you-begin). With this library, tasks such as the addition and removal of layers isn't something that's easy to pull off. And while there are secondary libraries such as deck.gl that promise beautiful layers, it's not something I want to add to a slim React app just yet for what I want.

This library is a declarative wrapper built around MapboxGL for React, as well. The library is around 50kb size, there are no security issues, and there appears to be a small community. It also appears that I can build on top, which is nice. And I could've gone for it, except that I realized that it would take as much time to build my own wrapper as it would to learn this one.

But the truth is that often, you can just use the library as-is, and build out functionality as required, suited to your particular use case. Mapbox, the company behind my favourite mapping library even shows how themselves https://blog.mapbox.com/mapbox-gl-js-react-764da6cc074a and I was able to construct something similar to what's below:

There are drawbacks to using your own thing at the applied level. First, it's likely that the library has more robust testing. There's also a chance that the library might be a bit more performant. But by doing it yourself, you might learn a lot more of the fundamentals from the thing which you build! If you depend on libraries, you don't know what new things about the language you might miss out on...