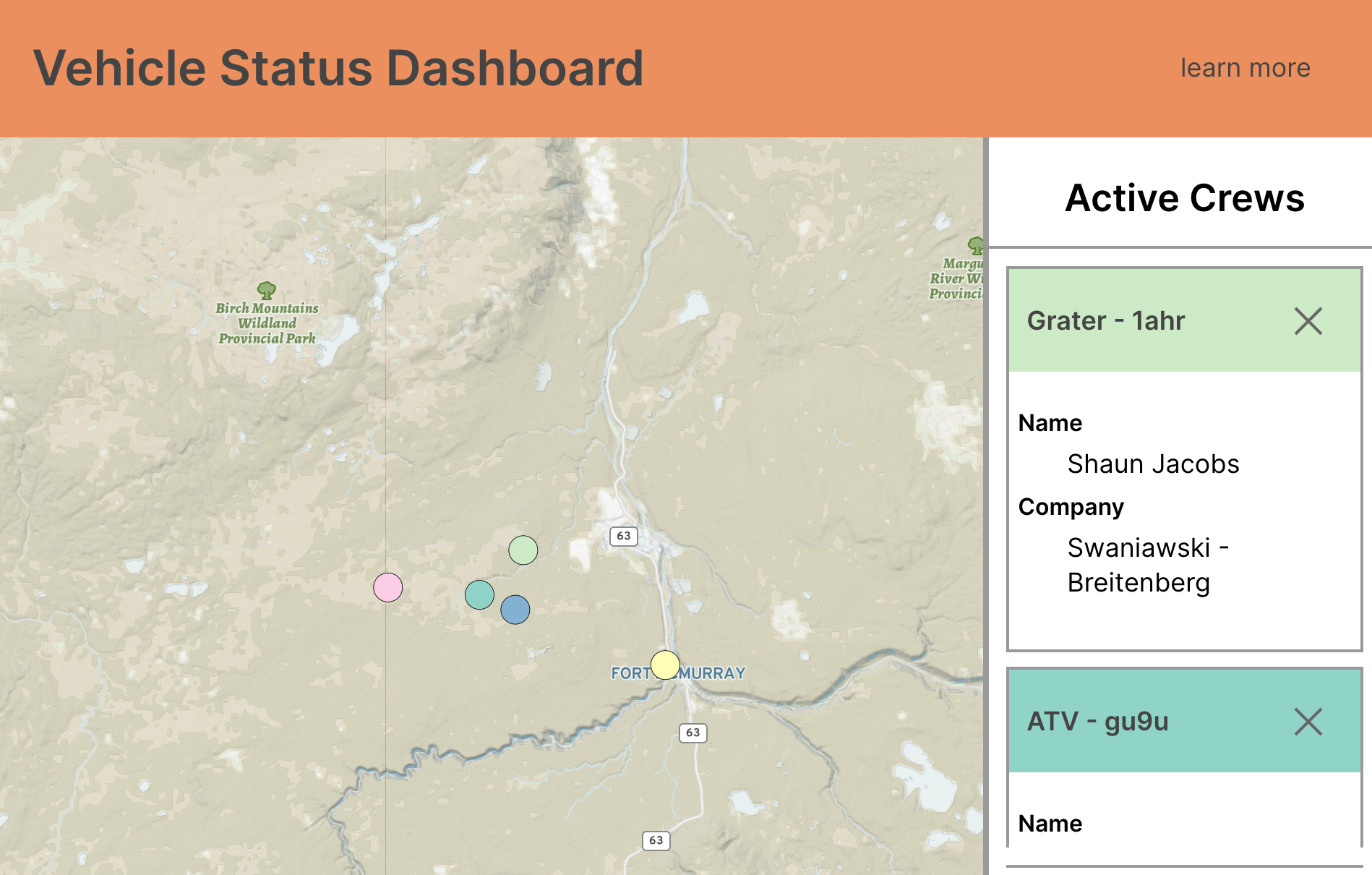 This is a submission for the Mapbox partner training program. It's a hasty UI that tracks "simulated" vehicles using a polling system.

This is a hasty app that uses create-react-app's React framework, along with react-redux and grommet.

The UI is hosted on Netlify, and uses Netlify Functions to create a API that acts as an external source of truth. I chose this hosting because it's free. I like free.

There was no hard specification or reasoning behind what external data source one is to use in this certification. Because I like to work with people in the frontier who are less-established, it means that I would work likely with ad-hoc setups. As a result, it made a lot of sense to model a scenario based on a sample work crew around the Oilsands region.

Registering work crews actually generates a seed that feeds parametric function. Polling has the server calculate the new position based on a function of time for the same parametric curve.

Often, there might be a socket setup for two-way text communications over radio. But because of time limitations, I had no interest in setting up a push notification for crew messages. This can be done, but for now, I generate sample messages using an API endpoint.

For this part, I started with my own poorly-written but oddly-useful React Hooks example in the Sparkgeo Blog (link). What surprised me was that I written it exactly the way I like to read tutorials: The TL;DR and the text once I get it working. And this time, the TL;DR just worked fine.

Mapbox was kind enough to provide criteria. Here, let me break down how I interpreted the criteria and built the app.

Map should have a custom (non-default) styleThere are two styles for this site.

For this site, I ended up using a style (which is public) that you can find at 'mapbox://styles/brianbancroft/ck2r23wm408me1csue4nbr8zq'. I believe it's a close copy of a terrain map from the gallery. The big thing is that it's a custom style that I had lying around from sometime in the past, as opposed to something that was branded to a general mapbox style. 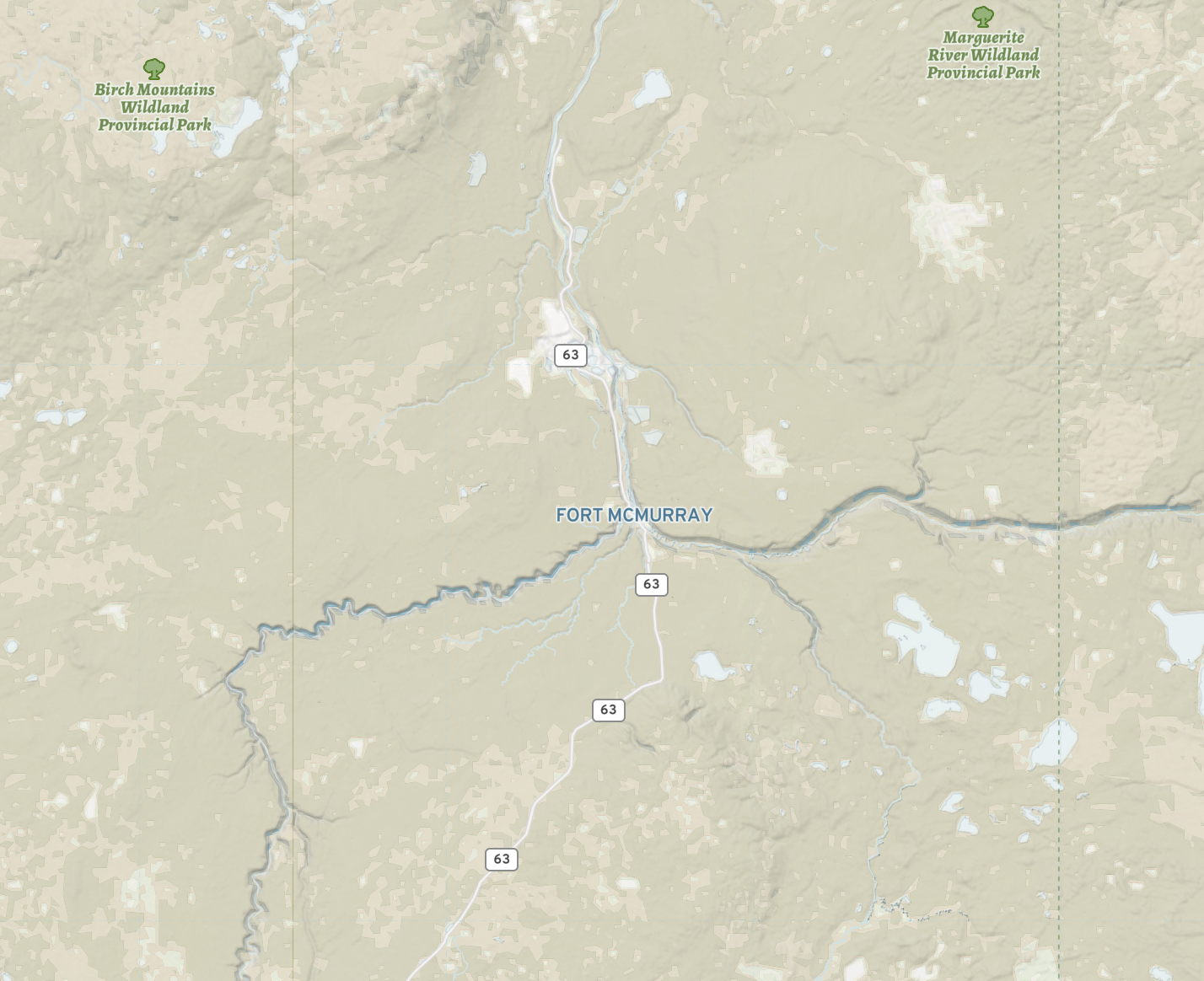 I chose this style for its plain aesthetic that emphasizes terrain over cover. Truth is that I would use this for all zoom levels, as in a working environment, the satellite cover is never as reliable from year-to-year. Cut lines, and nature's swift reclamation are a fact of life beyond the roads.

Map should present a series of points, updating in real-time 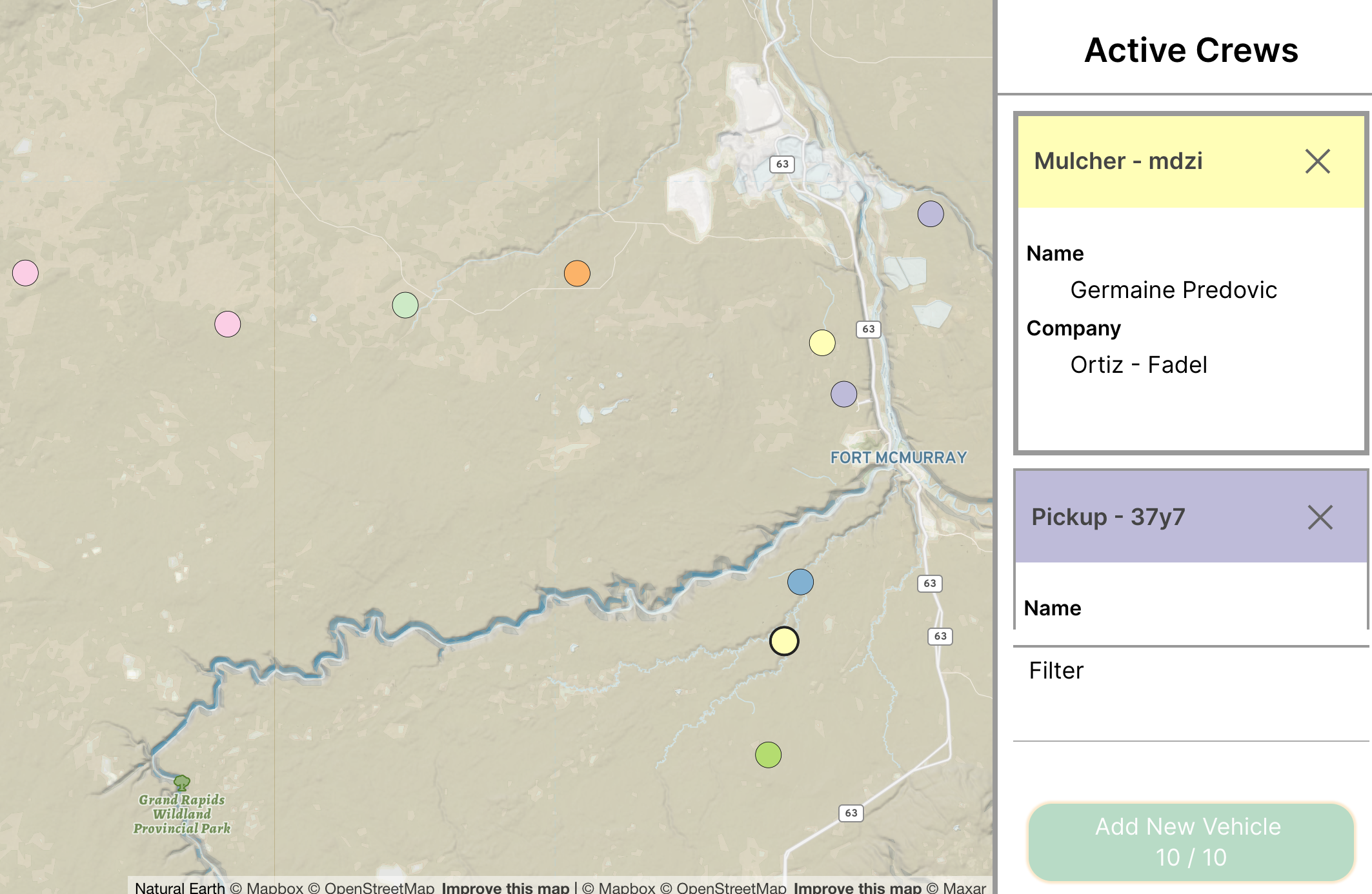 These points update every n seconds through push-polling (where the client asks the server for an update). Thanks to how little lambda functions cost, it is very inexpensive to create a server that returns a position on a parametric curve for a seed that is unique to the vehicle.

Hovering over a point should change a visual attribute (size, colour, etc)

As you can see in the screencap in the last section, hovering over the point (or card) will change the border on both the border as well as the card.

Hovering over a point should create a popup 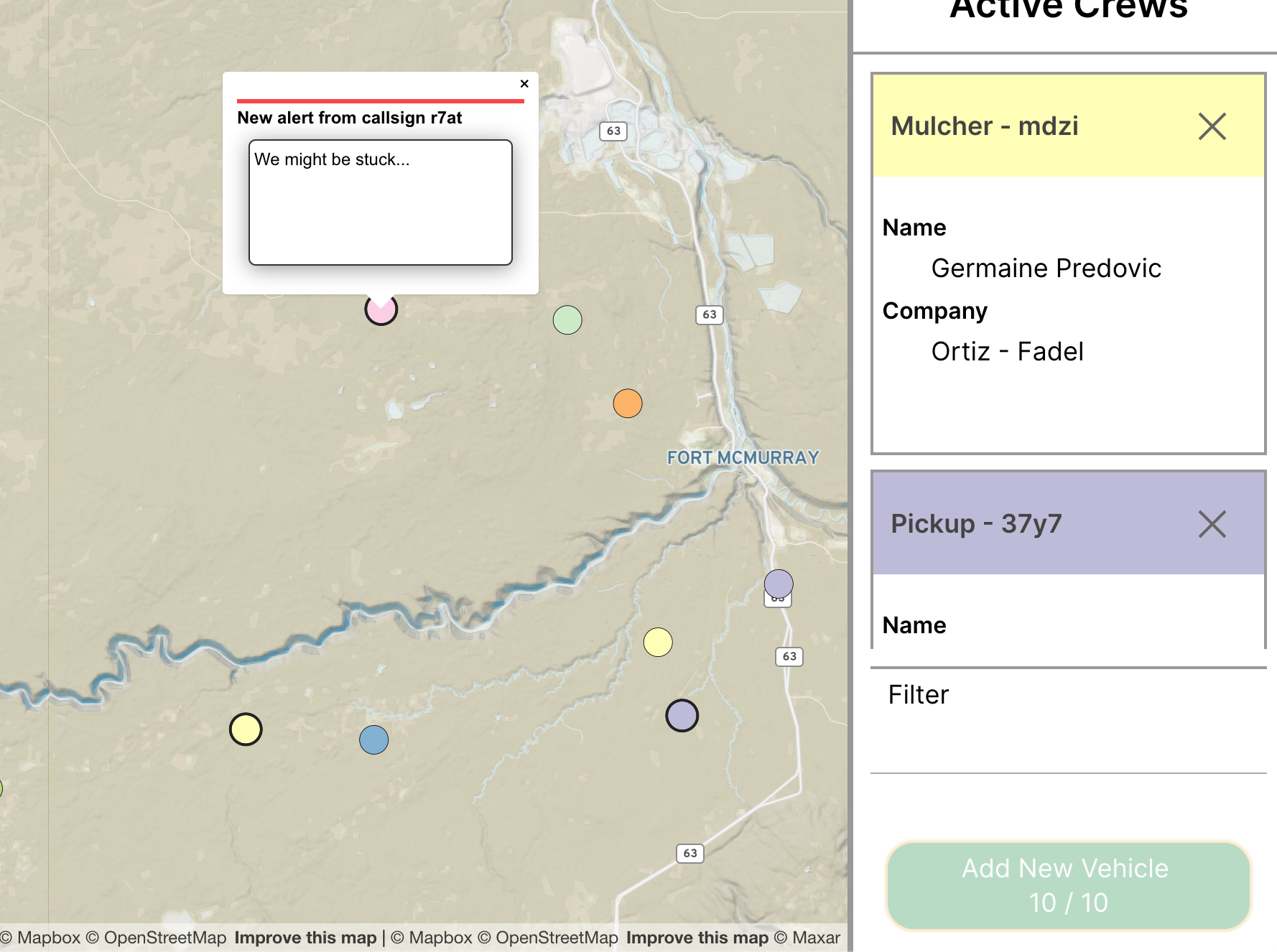 I chose a single property from the source as a demonstration that it could be done: The crew callsign.

The popup also contains the message type as well as the message content, which is retrieved through an API request that seeks the latest status from a given callsign. By definition, APIs living on some server are external to a client. 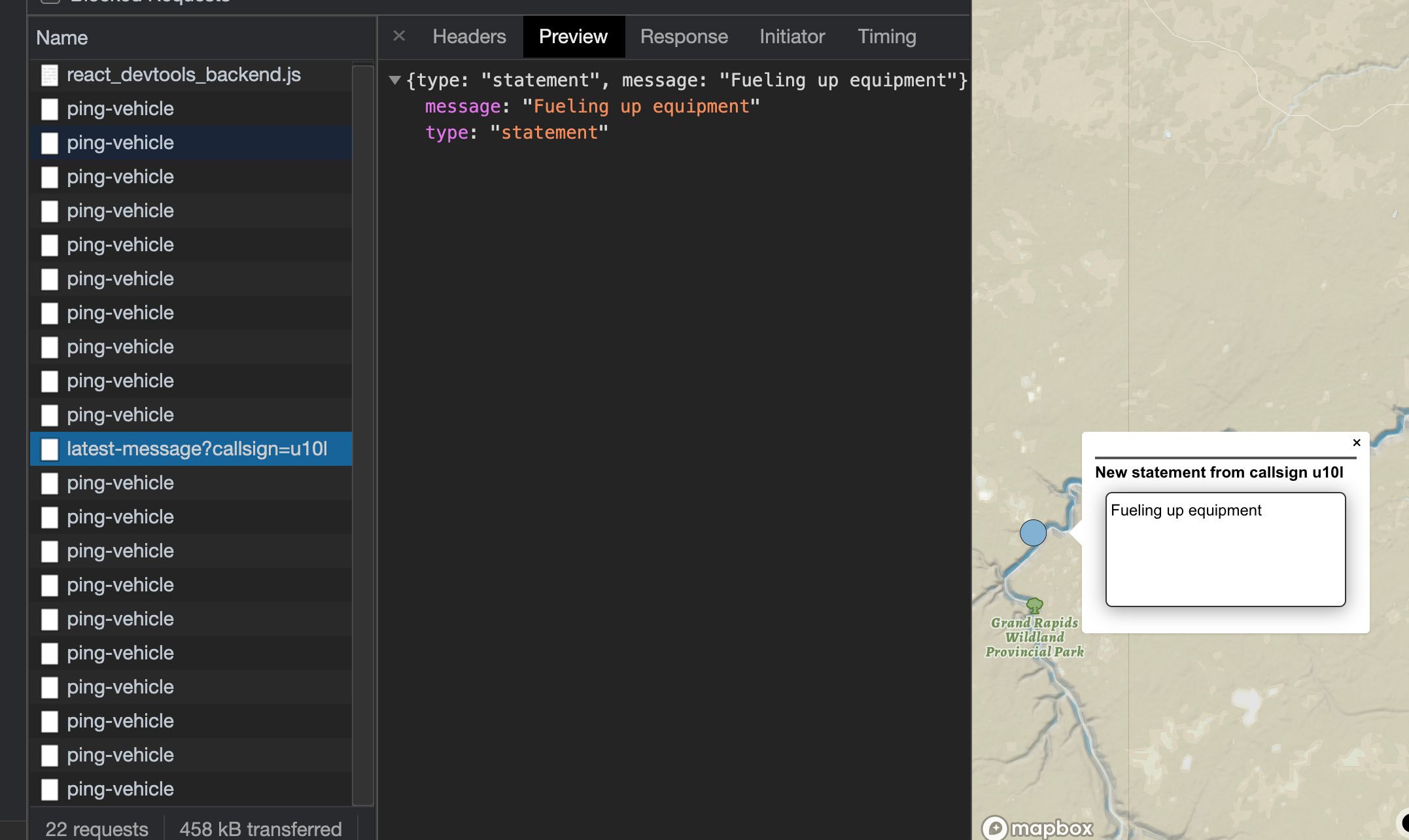 Map should be searchable

This term, loaded with ambiguity means "the settings should be set to public for this to be seen by our experts". So, public-facing. So if you can see this, you should be good.

Try it. It will center.

Clicking on point should add an HTML marker

Clicking on any point of the map will add both an HTML marker, as well as a copy mechanism that allows you to share the latlong of that particular point that copies the location to your clipboard.

Points should be filterable based on properties (through some kind UI)

Points are filterable on the right-hand side. This will grey out points that are not of interest, as well as hide cards that are of no use.

Map should switch to satellite imagery as user zooms

Yuck. So yes it does just that. Personally, I'm more of a fan of a toggle, as there are times a abstraction is better than the whole raster...